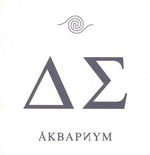 To understand this album, one often has to humbly defer to outside sources. As BG mentions below, there is the Russian classical tradition, influences of which one can hear swirling through and around traces of Beatles psychedelia (the Fab Four's Yellow Submarine is referenced in the cover art), Jethro Tull, Bowie, the mellower Zeppelin, and much more. But Silver Day is, I posit, the one Akvarium album that could never elicit a typical "Why, it sounds just like [fill in Western band]!" response from your average ignorant American. Not that I've experimented on any. It suffices that for me, an average less-ignorant Shtatnika, Silver Day sounds exactly like nothing else in the world.

Boris credits the album's unified mood to exactly the right source: the emotionally and musically rigorous cellist, Seva Gakkel'. All of Akvarium and Grebenshikov's greater works shine in their instrumental arrangements, and Boris did well to defer to Seva's strength in this area. Sadly, as he also mentions, the technical resources of 80s underground Soviet rock didn't match the talents and ambitions of those who made this album. Silver Day is filled with its share of mis-matched levels, awkward entrances and exits, warbles, and glitches. But most of the songs planted here go on to bloom and thrive in re-recordings or live versions. Meanwhile, nothing else comes close the funky poetics and lo-fi sense of liberation that Silver Day evokes. It is a bit like a prayer from inside the belly of a whale. Let's slosh on through…

Sitting on a Beautiful Hill: A simple melody, a happy Ringo-esque song. But it's not old folklore and it's not New Wave. Just a surprisingly poignant sing-along.

Ivan Bodhidharma: Yet another classic of the Dyusha back-up vocal genre, with a great moment on trumpet by one A. Berenson. Like most of the Ivans who cavort through Akvarium-land, Mr. Bodhidharma is weirder-than-thou, easier than smoke through plastic and tin. But we can dig it.

The Work of Master Bo: This is a proto-version of what will become a gorgeous number on Na Taganke and other collections. The strings (Gakkel' on cello, Aleksandr Kussul' on violin) do all the melodic heavy lifting, with Titov's bass grounding their occasional flights of fancy. Boris delivers the lyrics here with such sincerity and quietude, they almost seem to break the language barrier. But I'm still not sure what's up with Master Bo—nor do I think I'm supposed to.

Move Along: Now really dig it! Two guitars chasing each other around the room, a cello throwing riffs in their path, and a bass with enough sense to stay out of the way. One of the best rock arrangements ever.

Heaven is Getting Closer: As in the previous song, guitar-genius Lyapin steals the show here, but with very different results. In great rock-anthem style, "Небо" moves from oppressive psychedelia into wild, flying guitar solos. Gakkel' also saws away to great effect. If the sky were getting closer (forget about heaven) this is what it would sound like.

Before the Jazz Begins: A subdued, timeless favorite, so dear to me that in my illiteracy, I fictionalized most of a translation rather than deal with the fact that this could mean something other than what I imagined it should. The full credit for such a stupid paradox goes to Boris's earnest but restrained delivery, and a spare arrangement that allows an urgent sense of poetry to get through—destination unknown.

Electricity: Throws considerably more sparks whenever performed live in Tblisi, but this version has the advantage of not scaring everyone else out of the room. Sgt. Pepper-esque strings throughout, with Lyapin playing the echoing role Dyusha Romanov commandeered in Tblisi, bringing this song's strange, longing lyrics more urgency. "If I were a crimson-scarlet bird, I'd carry you home…"

She Doesn't Know These Are Dreams: Average Akvarium psycho-circus. I admit I'm dismayed to find the oom-pah-pah eruptions of post-America Akvarium manifesting themselves this early. But Bodhisattva Dji likes the "silly" stuff. And he's closer to God than I. Boris mutters some backwards phrases here, and miraculously, they don't turn into English.

The Shots from That Side: I haven't seen a translation of these lyrics, but they seem to have potential. Still, this song has borderline circus-tendencies that leave me cold.

Eye: I first heard this song on the Legends of Russian Rock compilation, and remember being surprised that Akvarium ever swung so close to zoot-suit, finger-snapping retro. Of course, Lyapin's guitar keeps one foot in the rock arena, but the sound here is an interesting departure nonetheless. "Give me a wall where I can hammer a nail!"

Hello, My Death: Not really sure what to say about a song with a name like that. Suffice to say it's never really been heard beyond this album. Dyusha makes a nice appearance here with both voice and flute. And Lyapin saunters in to steal the show again. Hmm…methinks he won't be doing that for much longer. I just noticed that our man at the mixing board, A. Tropillo, is doing something interesting with a distant-sounding mutter of Dyusha and Boris beneath Lyapin's solo. Unfortunately, they're mostly lost in the muddle of what-could-be.

Lullaby: A nice quasi-instrumental number, clearly under the classical influence of Master Gakkel'. Nice, but of such Crosby, Stills & Nash-type sentimentality that I'm glad Seva only got his way so often. Still, it's a lovely conclusion to a satisfying trip, one that evokes almost Biblical awe for those of us from empires where few would trade a slick recording studio for a kitchen, even one crammed with tea, Glinka, and a boatload of genius.

Oddly enough, the composer Glinka stands among the influences on Silver Day. An acquaintence of ours at that time, the director Alexander Sokurov, suggested that we record several of Glinka's romances for his film (which was never to exist). Impressed, we began to think about this unbelievable task. Analyzing Glinka's method, I was floored by his harmonic freedom. "Aha," I said. Why is it that can he do it and we can't?

All spring, I sat with Seva [Gakkel'] at his house and wrote songs. I'd come up with an idea, but he wouldn't be content with even the simplest variant. Naturally, for next time, I'd want to bring something that would impress Seva. He'd listen and not be happy with it either. In the process of these back-and-forths, all that would remain in the end would be what he liked—and so we'd both remember it (nothing was ever written down in the form of sheet music). But insofar as our musical point of view was approximately the same, everything moved in the right direction.

In the process of hammering out arrangements, we discovered a need for a violinist, and before long Seva met Sasha Kussul' in Saigon [SPB record store, on Nevskii -trans.]. We never could have found a better candidate. (Rumors went around that Sasha was a grandson of Wagner—I don't know if that was so, but Sasha suited me considerably more than his potential relative). The work flowed, and tea poured in rivers [Dzhon's right, this has to be tea of the strongest variety, with the strongest of sugars. -trans] At that time, Kussul' studied in the conservatory, worked as first violinist in the orchestra of the Musical Comedy Theater, and played nights on the Neva embankment. But he somehow still had enough energy for grueling rehearsals with us. There were other (personal-mystical) factors, that gave us no peace. Telepathic horses, flying saucers (we witnessed one, right from my own roof). Not to mention the spirit of Peter III, which decended on us like a brigand in the ruins of his palace (though, on the other hand, why did we crawl in there? It was Tropillo who'd dragged us there.)

Maybe, in a purely musical sense, not everything happened 100% ideally, but I feel this reconding and this album was the best Akvarium of the 80s. On Silver Day and December's Children what we wanted was what was brought into being.