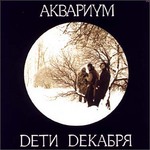 Dji sez: With the exception of a few songs, I have simply not warmed to it. In response to my original comments, Dzhon writes: "I think you're unduly harsh on December's Children, which really only has one song, "Thirst," that is actually annoying, and four tracks that I saw fit to include in an "Обязательные Песни Аквариума" collection I once made." More meditation required? I don't like it, but it's no doubt somebody's favorite album. Dzhrew writes: "Chicken, you lose credibility [with reviews like that]." Maybe, but I'm absolutely correct: it is someone's favorite album and "they" have their reasons. Buy the tape and hear for yourself.

Dzhon counters: Yes, the production is so murky it sounds like it was recorded, so to speak, at the bottom of a fish tank, and yes, it leads off with "Thirst," which is—I opine, after years of careful consideration—far and away the worst thing that the Original Akvaium ever came up with, but these blemishes only serve highlight the essential brilliance of the rest of the album.

Let's start with the "Thirst" issue, if only to dismiss it out of hand. It's terrible. It's not even original and terrible but highly derivative and terrible. The lyrics rip off David Byrne and the music, so called, is a Casio and trash can symphony of industrial banality, like Einsturzende Neubauten playing Space Invaders. Don't know what they were smokin' when they decided that not only would it make a good first track on DD, but that it merited being released as a vinyl EP—one of only a handful of Akvarium vinyl releases from the 80's—but I could use some of it right now. This would be like the Beatles releasing "Revolution #9" as the obvious single from the White Album. Worse, in one of the great marketing blunders of all time, they allowed it to get onto Red Wave (I'm presuming here that it's not all J. Stingray's fault, though it may very well be). "Thirst" was supposed to convert the masses to Русский Рок? Right. And perhaps McDonald's will start serving a МакХолодец which will become the new rage of American fast food emporia.

Fuhgeddaboudit…"Thirst" is the reason they have "skip" buttons on CD players. Let's look at what matters, which is everything else. "Dreams of Something Greater" is a high-wire act of chiming keyboards, controlled dissonance and simple percussion—as blurry, repetitive and seductive as a dream. "Kad Gaddo," on the other hand, is striaghtforwardly lovely, pointing in the direction of Russian Album; it builds a haunting mystical soundscape where Gakkel's cello dances intricately and evocatively with bass, cymbals, keyboards and guitar.

"She Can Move," as Dji suggests, is indeed a 50's-style rave-up, but—hello, out there!—it's great. Shake it a-baby! The only real drawback is that subsequent live versions (10 Arrows, 25 Years) are actually even better, so if you have them the album version tends to pale. "Dances on the Verge of Spring," with its skittery, fidgety guitars and keyboards and funky bass is Talking Heads-ish in approach, but, unlike on "Thirst," here the lessons of Byrne et al. have been put to very good use; while "Village" is a gentle pastoral interlude with guitar, strings, flute, and horns suggestive of the Zen sublimities of Bardo.

Throw in the smoky, bluesy, "I'm a Snake" (certainly "for the ladies" and just possibly about getting a hand-job), the elegiac "December's Children," and "2-12-85-06"—sure it's silly, but it's also catchy as hell…closer in spirit to "Rock Lobster" than "867-5309 Jenny": Dji, who has more "капитан внутри" than anyone I know ought to love it—and you have a definite keeper, and Dji should keep his sad, wee lingham out of sight until it can properly fill hip-hugging leather cemetery pants.

Boy, such a dis. I've given the album much meditation since my early "dis" (really just a lack of proper enthusiasm amplified through the harsh gaze of Dzhon's love-struck eyes) and I have reconsidered my position...

Continuation of the idylls. A sense of what we all can do. Once again, Kuryokhin attaches himself to the process, and the recording goes like a song. Into the project go the landscapes of Karelia, where I lived that summer ("Village"); leaves of metal and avant-garde detuned guitar ("Thirst"); the 10th-Century Welsh bard Gwyonap Gwernach ("Kad Gaddo") and on and on and on...

By some technical coincidence, the flutes and choirs on "Dreams" showed up by themselves on the tape (we used unerased tapes from Melodiya)—in exactly the right key, and in the necessary places. Everyone who can sits with me at home at night and plans what and how is to be done on the morrow.

The saxophones on "212" were played by "Uncle" Misha and Lyapin (the lower voice is played Lyapin on the guitar, run through a guitar synthesizer). The authentic scream on "She Can Move" is Pyotr. It's his debut as a singer. We owe him for the timbre of the Korg on "Underwater."
Well, if you're going to talk about magic—though the less you talk about it, the more remains—the strings on "Village" stand as a contemporary example of it.