Stuffography Songs of the Chessmasters of the Last Century 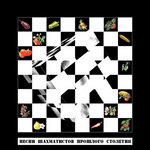 Songs of the Chessmasters of the Last Century

Boris and Sergei Mad Socks" Kuryokhin put the Wilburizer and the Wurlitzer to work...in English (second language of the Chessmasters of the Last Century). The resulting songs are interesting Anglo-BG artifacts, particularly for those of us who wish Radio Silence had benefitted from the wack collaborations which engendered Borya's best Russian work.

Axios begs the question: do rosaries have pages? It's pleasantly choral and a little catchy, mostly in waltz tempo but floating around—Dave Brubeck would either puke or be impressed (or both). The tchooometer, pronounced choo-'ah-meh-ter, reads in at 4 out of ten. This is a good thing, since we like random buzzes, clicks and tchoos. The mumblometer reads in at about seven (just above the average 80's Dylan concert reading).

"Axios" sounds like it could have been on Black Rose..., particularly the "I can talk with you/I can walk with you/ All throughout your life [e.g. 3:12 before the end of the song]" melody (which is repeated exactly in some munchkin song on Black Rose, I do believe). If you like Black Rose and want to pad out a disc you're burning with mots (i.e. more of the same), давай. That goes for the other three songs, too.

Glimpses of You channels George Harrison (ten years before his death: It was quite a channeling) through a Wilburizer canal. It has the whump-whump-whump-whump rhythm, distant reverb, and plunging organ chords musicians usually pull out when they want to get the

word "beatlesque" applied to their work. Dzhrew describes the vocals as Murmur-Stipe singing in a Beatlesetto with his nostrils pinched together. Kuryokhin must have gotten a new synthesizer with the Sgt. Перец expansion card. Pink Floyd-ish, too.

The English is especially unintelligible here (an 8 or 9 on the mumblometer) which might be another reason why Dji really enjoyed it. Or maybe he's just a sucker for the Wilburizer (ya think?). The tchoo-ometer reads a paltry two, but it's still Dji's favorite of the four cuts.

Law of Induction begins with the riff which held up this mini-album's release for ten years. Although a rare display of shame by all involved parties has kept it out of the media, the delay resulted from a riff theft lawsuit—Boris and Kuryokhin vs. Alla Pugacheva. At one point, Bodhisattva fave Johanna Stingray sued all parties involved (plus an unnamed Moscow hair dye specialist) claiming the riff was her own invention. But in our opinion the disputed riff is so routine and blase as to be not worth fighting over—we will give an honorary Patent, Trademark and Lingham Office award to the first reader who can find the same riff in an earlier song in a non-Stingray, non-Pugacheva source—there is no way any of them made the riff up. Pugacheva may have made up the corny synthesizer effect with which the riff is played, but we don't think that counts for much in the world of authorship.

But don't let the scandalous riff keep you away. This song features the low rumbles, buzzes, clicks, whirrs, and tchoo-like sounds which should be required BY LAW in any Boris/Kuryokhin collaboration. The tchoo-ometer wavers between 4 and 7, then skips to a full 11 near the end, when Kuryokhin takes an old model Star Trek phaser solo. They have acquired flanger technology. Once you throw in the squeaks and the subsonics, even the "Alla Stingray" lick becomes a torturous delight. Sort of. If the mumblometer had registered a little higher than three or four, this song would've truly laid down the law.

The first few bars of Opera Backwards remind us of "Beat It" (M. Jackson). Since it's a synthesizer, it's a little annoying, but Kuryokhin is pretty good at the layering technique of having one riff/theme grow as another fades away (cf. Lush, Slowdive—who do the same with fed-back guitars; The Orb does it more electronically). Pick a "boop-boop-boop" or a "munga-munga-munga-munga" in the post-lyrics section of the song and focus on it as it grows and fades away—it's the stoned mind that best appreciates this layered architecture, so maybe it's a good idea to have a few words with Master Ja (who gives us All) before diving into this tune.

You Ramses haters out there might note that it sounds like an outtake from everybody's least favorite mainstream Akvarium album (except Dji's) both in its reliance on riff repetition and in its longdrawnoutedness.

In sum: This mini-album provides a visceral illustration of the "Bodhisattva" rating. Although the songs are significantly more listenable than The One-Track, they definitely have that strong dose of wack which characterizes Kuryokhin/Boris projects. If you hate "tchooooo!" you'll hate these songs. Dzhrew recommends these as the first step into the larger world of Kuryokhin + Boris and suggests that if you can stand these tracks, check out the One-Track. Dji thinks that's a tad ambitious. If you can stand these, buy the One-Track and keep it in your laundry pile for awhile. If you find that your clothes come out of the dirty laundry pile clean and fresh, listen to the One-Track.

Meanwhile, if you're a student of the Anglo-BG experience, you may find that this tiny offering gives you a sideways, backwards, upside-down and obscured glance at what Boris might do in English under the right circumstances. We enjoyed it. And we take this opportunity to again voice our plea for Boris and Ded to work with various Akvarium luminaries to produce songs in English, Russian, Tibetan, and Lhar...under the guidance of Brian Eno.