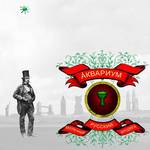 "For five years akvarium made very good, but nevertheless predictable albums—music which people call mainstream. But this is considerably more full-blooded." When I read this quote, I had to wonder why BG only refers to the last five years and if the new album Carefree Russian Tramp would really make be different. After listening to it a couple of times, the answer seems to me to be both yes and no.

Essentially, the album brings together the different facets of "New Akvarium." It begins with ten minutes of Deadushki-like industrial techno that obviously are intended to scare off anyone but the most devoted listeners. The brave are rewarded with a couple of tracks from 2004's aborted "Reproduktor" sessions. "Mama, I Can't Drink Any More" now has some electronic texture, Indian flute and Tom Waits-style distorted vocals. "Voulez-vous coucher avec moi" is acoustic with a beautiful viola solo.

Next comes the Celtic part: "Glasses" and the title track both combine BG's lyrics with traditional Irish melodies—similar to the style of Snow Lion—but, especially in the case of "Carefree Russian Tramp," to greater effect. The album then approaches its finale in a classic style resembling mid-80s Akvarium. "The Head of Alfredo Garcia" and "It's Up to Me" are solid BG-rock while "Weaver" and "A Day in the House of Rain" showcase the epic side of Akvarium, the latter being an notably beautiful ballad.

The album closes with a musical elipsis...four minutes of wind chimes similar to the bird singing at the end of Zoom Zoom Zoom. And then there's still a musical appendix for the isatiable which is like the whole album in short: one industrial track "Russiablues," a Russian ballad about Dostoevsky, a sparse jazzy song with the original title "Little Known Facts from the Biography of Elvis Presley," an instrumental, and the closing ballad "Therapist."

Carefree Russian Tramp delivers plenty of music (about 70 minutes) and arguably took Akvarium longer to make than any other album. But is it really the career-highlight BG-optimists are still waiting for? Unfortunately no, I would say. The album is too long, there are too many weak spots and—though bg claims the opposite—large parts are predictable, standard Akvarium. However, Carefree Russian Tramp still has more depth than the last few albums and contains a couple of really great songs. Also, BG's lyrics show a wider range. (Besides the esoteric stuff, there are also love songs, drinking songs, and songs about being a Russian.) The new album may be neither Russian Album nor Equinox, but in my opinion it still makes a fairly good listen and gives proof to the continuing relevance of BG's music.