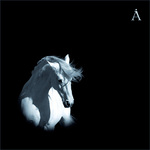 White Horse is one of the better Akvarium recordings of recent years, even if, like BG’s other albums of the Naughty Noughties, it overdoes the eclecticism to an unfortunate degree. Most artists recognize their own limitations—Lady Gaga doesn’t dip her painted toenails into Heavy Metal; Jack White doesn’t pen power ballads; Garth Brooks never released a Ska album—but, after this ten year roller coaster of mix-and-match genres, it’s clear BG either doesn’t self-edit, or simply refuses to acknowledge that there are some things he does better than others. The upshot is that with Millennial BG (i.e. post –Psi, which was Akvarium’s last stylistically consistent album) we’re always going to get a potpourri of musical soundscapes and should count ourselves lucky if half of them work.

The first six tracks certainly do in this case. The title track, is a lovely little acoustic lullaby that wouldn’t feel out of place on Acoustics. This followed by “Blow,” a stomping, visceral, horn and guitar-driven rave-up that is the highlight of the album for me. (The lyrics are memorable: “We wait, wait, wait / Stirring vodka with a nail / Beat your forehead against a wall / Beat it against the cross / Nobody gets out in one piece.”) The winning streak continues with “One More Time,” a melancholy, meditative piece, with lovely interplay of acoustic guitar and a duduk that gradually is overtaken by (Holy Shades of Classic Akvarium, Batman!) a great drum, cello, flute and guitar jam. “God Knows Best”—lush with the interplay of cello, keyboard and bass—likewise plays to BG’s songwriting strengths, while “Pansies and Ladybugs,” with its simple flute and acoustic guitar melody, is, if not particularly memorable, then at least not annoying. And, finally, “Hawk” showcases BG’s voice and a simple guitar line to good effect, even if some unnecessary orchestral strings clutter things up towards the end of the track.

And then {sigh} in the second half of the album everything goes a little haywire. “Arigato” is the {louder sigh} now de rigueur diversion into Caribbean dance music. I’ve ranted about tracks like this so many time now that I find I don’t have another rant in me. Much weirder, however, is to come in the form “Hakuna Matata.” Yes, like the irritating Disney song, familiar to survivors of the 90s and parents of small children. “The time has come to quote Disney,” BG chirps, but it’s not actually a cover of the Elton John tune; rather it’s something even more eccentric: a bubbly bit of goofy two-step elevator jazz with lyrics that are self-consciously jokey…but not quite jokey enough to overcome the banality of the tune.

(As I was typing the above, my neighbor knocked. “What on earth are you listening to? Lawrence Welk?” quoth he. Alas, I understand the error.)

And, sorry to say, it doesn’t get much better the rest of the way through. “Paisiy the Bee-keeper's Word” is a long, meandering, hook-less pastoral that sounds like an outtake from Hyperborea.  This means that unless your name is Dji, you probably won’t care for it much. “Girl with a Paddle” is a curiously empty piffle in 4/4 time, where what could have been a lively accordion line is completely foiled by the “marimba” key on Rubekin’s keyboard, among other ill-conceived electronic effects. It sounds like the cover band in the lounge of a Holiday Inn circa 1977.

And, then, what shall we do with “What Shall We Do with the Drunken Sailor”? I suspect that if it were actually a cover of the well-known English sea chantey of the same name, I’d have enjoyed it, just as I genuinely enjoyed the Mit’ki albums.  Alas, it’s not…and its oompahpah horns and shouted sailors’ chorus just sound out of place here, especially when followed by the snooze-y, overlong “Ineffable” (an apt name for a song that goes nowhere).

So, six songs I approve of, six that leave me cold. 50/50 doesn’t sound so hot, but in this “post-album” decade that really isn’t so bad. Anyway, except for us oldsters, who on earth listens to “albums” anymore? I’m cognizant that in 2010 there’s an element of anachronism to such complaints. The whole concept almost merits a footnote, which I’ll provide here:

ALBUM (noun, ca. 1962 – ca. 2005): a musical concept that flourished in the latter half of the 20th century, in which a stylistically and (often) thematically-linked group of songs was presented to the music-buying public as an integrated whole, and invited appreciation as a unit. Slain by the mp3 and file-sharing.

So if White Horse doesn’t pass muster as an “album,” then as a hit-and-miss collection of tracks it’s not unworthy. Add the first half to your playlist; give the rest a pass unless you’re a completist.