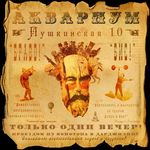 In recent years, we Boris devotees have become increasingly resigned to the variable quality of his output, He will typically produce a few brilliant songs and either mix them up so as to leave a bitter taste in the mouth, or punctuate them with some real stinkers. I am one of those who are willing to admit that we like a lot of the Japanese-influenced stuff on Psi. I have in fact often been seen searching for snails on the slopes of Fuji, sake in hand. I really enjoyed Sister Chaos, and I remember going to get it from the shop in St Petersburg the day (OK, maybe the week) it was released. Nevertheless, I have to admit that neither of those albums comes close to the exhilarating beauty of Radio Africa or Equinox. It was, therefore, with a heavy heart (and light kidneys) that I sat down to listen to Pushkinskaya 10. I even checked out the building on Google Earth for signs of hope.

This album, like Vyatka San Francisco, is a tale of two cities. It’s trying hard to be California, but all the best bits come from its more Russian side. Overproduction abounds, and there are some real howlers, especially the first two tracks. After that, it’s a bit like watching the lawn in April and seeing the daffodils come through—you know they are lovely, but they haven’t flowered yet, and to push the simile way too far, part of this lawn is astro. There is enough good material here to make it worth buying, but the best versions of the best songs featured on Pushkinskaya 10 are on Prayer and Fasting.

Don’t get me wrong, Pushkinskaya 10 is a decent effort, and if it had come from a lesser soul, it would be among that artist’s best work, but it pales when compared to the hallowed Russian Album. After all, we do not want Boris to stop producing new material—this is not like the Rolling Stones—but it is fitting that we lament his lapses in judgement. There was a time when he was incapable of writing bad songs, and this is not one of those times, but it’s better than Fisherman’s Songs and Zoom X3, much better.

A song for George’s birthday is a welcome upbeat number, and goes some way to saving this album

Vyatka San Francisco—is this a 21st century Graf Garcia? Yes it is, and I like it!

The juxtaposition of Bamzhi and the bubbly tune makes me smile.

Two trains is a great song. It does all the things I wanted this album to do from the beginning.

The Girls dance alone: Aside from the saxophone, which is a bit seedy-nightclub for my liking, this is what Boris does so well: complex, layered lyrics and a caressing melody. Every time you play it, somewhere a Militsioner looks for other employment opportunites.

The undercooked turnips and floating bits of gristle:

Forward, Bodhisattva: The neo-tchoo of Boris.ru features heavily. His soaring synth resembles an 80s BBC kids’ show theme tune, and not in a good way. Is Boris channeling Meatloaf (also not in a good way)? What did we at BoB do to deserve this? If we have inspired this stinking tribute by some act of cruelty or some sin of omission, please tell us and we will stop (or start—whichever receives the desired result).

How to be Tanya: Some things are so horrible not even Boris can make them work. Country is one of them. It’s a bit like amateur dentistry. The funfair from .ru doesn’t help Theorem of the Sphere has some lovely notes, and a few lines of exquisite beauty, but it’s ruined by the Queen-pastiche choir effect and over-produced orchestration.