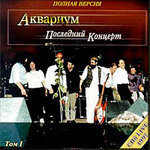 This album, to me, demonstrates everything that we miss about the old Akvarium. It's fun. It's really fun. BG doesn't say much beyond “Спасибо Вам,” and no one else says anything at all, but I can tell that everyone's having the time of their lives. Songs like "Two Tractor Drivers" and "Protect Your Prick" are great to hear live because they're so silly (though хой rocks like crazy live). I do like the 1990's Akvarium(s) and I love the Russian Album, but there's an element of fun and whimsy missing from the post 1989 lineups (with the exception, perhaps, of Ramses IV and Terrarium—neither of which capture the same spirit, though) that is part of what made old Akvarium so great. And there are no synthesized steel drums to curdle the blood.

Starting with "Sitting on a Beautiful Hill", Akvarium starts strong and keeps it up. There is not a bad song on the album. Some of the versions here give the originals a new lease on life: "The Game is Fixed," "She Can Move," "Assholes." "Rock-n-roll's Dead" is, of course, maddeningly fun, Lyapin's guitar (I assume it's Lyapin) going mad all over the place. But then, Lyapin goes mad throughout the concert.

The harmonies have that loose, breezy feel like the old times (such as "It's Snowed All Day") and, although the playing is a lot tighter than in the classic live albums, there's still a feeling of jovial informality, a sort of (dare I compare?) Grateful Dead-like collective spirit.

It was also good to just hear the old songs. Those are the songs that drew me in to Akvarium way back when in the first place. It might have been interesting to hear how Old Akvarium would have covered New Akvarium songs, but it would have broken the spell.

The two discs are heavy on the band's electric numbers, expecially disc two, with fast and furious versions of "It's Snowed All Day," "Captain Africa," and "Swan-like Steel"; but the second half of disk one is dedicated to their slower, living room songs, which gave Gakkel and Dyusha more of a showcase. Not having any of their really early material, I was excited to hear the (for me) legendary "From Beyond the Looking Glass" and "-30," which were hippy and dippy and fun and will make me go out and find the originals.

All in all, this is good stuff. Like any live album, there's enough to appeal (or annoy) any taste. It's a well-chosen selection of favorites, and the audience responds in kind with at-times maniacal cheers. But most of all it's fun.

Through a fuzzy fog of liquor, ladies, and lead poisoning, Dzhrew has a hunch he may have attended a concert from this tour. At any rate, there's no way Dzhrew was at this concert because he would have remembered the lineup of musicians (see below) and the 2-hours of music без intermission. It must have truly been a killer concert—these disks surely reflect it.

But don't take our word for it. You can download a track from the album ("R&R's Dead") at this official page.

Vidimka adds: "As far as I know, the album which was released recently called Last Concert—25 Years is the full version of the 1997 Spb concert, while 25 History is a compilation of some songs from both of the anniversary concerts in Spb AND in Moscow. However, get 'em both, for the gig in Moscow is not released anywhere else but on 25 History yet."

NB: There's both a one-disc and a two-disc ("полная версия") edition of this concert recording floating around, both, to all appearances, "фирменный." The one-disc version contains only 17 songs (70 minutes) worth of the concert. You'll want to track down the two-disc version, natch.