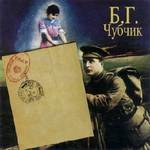 "I thought he was losing his mind when he came out with this one."
—Dzhubchik's friend Sasha

Warning: The album Little Forelock may not be sold to minors. Do not operate near open flame. Pregnant women: prolonged exposure to this album may cause birth defects including, but not limited to, little forelocks that will not stay down, and an accordion-induced tendency to raise arms, snap in the air, and stomp the floor like a goddamned fool.

So you went against all better judgment and bought it anyway. Or maybe some proselytizing pusher gave you his extra cassette. Don't turn to me for sympathy. Many states have already passed Forelock-reform laws just to cope with the likes of you: sitting around the kitchen table in a haze of smoke and cabbage vapor, crying in your vodka, french-kissing the shot glasses and one another, reliving the War, Watergate, and web-page formats as Boris warbles in the background. Don't think we don't know about your type; we know.

Little Forelock: Boris Borisich will tell you all about the heart, about romance, about the romance of drinking, about the delights of drug-tourism. Don't blame him, though—except for the last, he didn't write any of this stuff. He's just facilitating your descent. Rigorous research—of the sort that forever ends disputes over the meaning of such terms as "sensimilla"—has found that the song-order of Forelock is exactly calibrated for maximum degeneracy. Ratatouille: Just a little squeezebox number to ease you into the mood.

Heart: Thank you, heart, for knowing how to love. You're a little skeptical about the cornball lyrics and super-Wilbur delivery, but you can't help it, you're warming to the music.

Shinkayevvskii Romance: Stealth polka attack: there's an accordion whirling around the steady guitar-strum of your heart, and if you don't light a cigarette by this point, you're not really human. (I just went and borrowed one from my next-door neighbor as a test: it's true).

Little Forelock: Two things are happening to you. One is, you are tapping your feet. If you're a repressed man, you're only smiling—but hey, that's progress. Maybe someone is smiling back at you, and your shot glass is refilled. Suddenly Boris is singing—get this, semi-literate Russian speakers: Boris is a woman! She-Boris once loved Chubchik, and now she can't forget it. And what about Siberia? Fuck it, she doesn't fear the Russian earth. Someone is knocking out a beat with boots and spoons; someone has grabbed your hands. If you're not swinging your partner or at least snapping fingers in the air by the end of this song, then you need therapy.

My New York Time of Troubles: It's okay, though... Boris is with you. Boris also needs therapy—drug therapy. He found the answer, though. He's going to share it with you, after washing down this batch of pills.

Black Crow: The sad animal undertheme re-emerges. Don't fight it. Have some more vodka. No one said life would be easy.

You're My Sweetie: Aw. It's nice. It brings a little tear to the eye. You remember the days of innocence long ago when…

Little Loom: Comrade, shut up, you're too nostalgic! You're not dead yet! Your heart is still beating, your mouth is still drinking. Think about our factory! Something must be done: you need to be dancing. You need to be whirling. Perhaps you need to fall down in a heap. It's already happening.

Clouds Hung Over the Town: Scientifically calibrated to please both those who are still dancing and those who have already fallen down.

Uncredited 12th track (My Happiness): Takes forever to cue up. It's a retro-French sounding tango of exceeding goofiness. My flower, my friend. Someone start the CD again.

The liner notes (though not written by a Guru, they are nonetheless worth reading) say—

Exactly who the drummer is, just that it's "The Legendary Pyotr." Dzhrew assumes that means Troshenkov. But does it really matter to anyone other than The Legendary Pyotr's legendary parents? Presumably anyone named Pyotr can carry around these liner notes and use it to pick up women in bars. "Oh yeah, that's me. I'm a legend. Me and Borya go way back."

Everything started at DK Svyazi towards the beginning of 1992. Recording music for Tikhomirov's film “Grass and Water” we were unable to refuse a request to write music for a cartoon “Mit'ki-Major.” The songs recorded there were forgotten for a long time, and when the recordings surfaced again they brought forth a hullabaloo (i.e. drinking under their influence wasn't half bad). The second installment included “Black Crow” and “My Sweetie” recorded at Fontanka at the time of Sands of Petersburg and Songs of Vertinsky. The third part arrived in the winter of '95-96 on Pushkinskaya. The temperature was below zero and the electricity kept going off; the clarinet went out of tune five times a song due to the cold. Let it be said directly: the conditions were heroic. But our enjoyment was likewise without limits.

As far as the third part goes—“Clouds,” “Little Loom,” etc.—one has to acknowledge its debt to the Mit'ki (for that matter, the first part also has a debt to them). The Mit'ki (i.e. Shagin himself) unexpectedly appeared in our studio one day with a request to record two or three old Soviet songs. We agreed for laughs, and, starting the attempt, discovered the general genius of these songs. Honestly, we became sorry to give away such splendor, and, bartering like we were in a market, kept “Clouds” for ourselves and gave them “Spring on a Riverbank Road” in its place.

There are those who heap blame on us for this album, but I continue to stand by it: unplug your ears and listen to it without bias. The people who composed these songs weren't fools, hacks or cynics; they also weren't blind to what was going on around them. True, these songs come out an epoch of our history that isn't loved by us, but any epoch at all is inhabited by normal people, people the same as us. And it's sincerely worth one's while to sing these songs, as it turns out that they're not about “then” but about “always.” And therefore, they're about all of us.