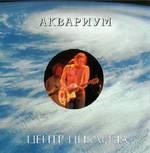 Thin, thin, thin and, in fact, fairly pointless. This is probably the least interesting of all the live albums...even the problematic Season of the Snake has far more to offer in terms of non-album songs and inspired variations on well-known album tracks. Which is to say, yes, Cyclone's Center is Akvarium and therefore, almost automatically, Olympian and all that, but we Bodhisattvas are destined by Our Dedicated Pursuit of the One True Way to split all kinds of unimaginably fine doctrinal hairs, count how many manifestations of Gautma can dance on the head of a pin, and like tasks beyond the ken of mere mortals. And we say—or at any rate, I say—that Cyclone's Center is a completists-only affair by virtue of its almost total failure to offer anything new.

The set opens promisingly enough with a lovely, lilting, stripped-down version of the song "Navigator" that's actually a nice variation on the original. But do we really need the 3:30 minutes of mwauwauwauuing drone that precedes it? It may have heightened the anticipation in the auditorium, but it serves no such effect here...indeed, it induces an impatient yawn.

"Navigator" is followed by a strangely restrained, meticulously careful version of "Custom House Blues" and then a stricly album-faithful version of "Little Blue Light." Ho-Hum. Ho-ho-hum. (That's another yawn...not a Buddhist chant). They're excellent songs, both, but you already have them on Navigator, of course.

If you don't have Navigator stop what you're doing and go buy it this minute!!!

Good. That's much better. Now that we're all on the same page, it can be revealed that the entire first disc of Cylone's Center is just Navigator played in a different order. Navigator has 13 tracks...and you'll find 9 of them again right here. This is what one might call "too much of a good thing." Some of the tracks are exquisitely well played—"Suffering," "The Three Sisters," "The Fastest Airplane"—but none of them are substantially different from the album versions we already know and love.

In fact, it's obvious that none of them really aspire to be different from the album versions; BG is clearly in "careful presentation of new material" mode...which is a pity. What this Bodhisattva (and Navigator diehard, it must be added) misses is a sense of revelation: testing the limits of the songs, adding new facets or depth to them. This is the hallmark of a truly outstanding live performance...and it's sorely lacking here.

Finally at the very end of Disc 1 we get something new, the song from which the album draws its name, "Cyclone's Center," but it's a tuneless, tentative version compared to the one that will later appear on Snow Lion (perhaps because it's a brand new song at this point?), and, in and of itself, it's certainly not enough to redeem Disc 1 from being an unadventurous re-hash of Navigator…

Alas, Disc 1 is really, by a long shot, the better disc in the set. Disc 2 does offer more variety—drawing from Equinox, Kostroma mon Amour, and Russian Album, among others—but musically it's tepid and uninspired, certainly not BG & Co. at their live best. In particular, the versions of "Tree," "Partisans of the Full Moon," and "Volga Boatsman" are rough going for those accustomed to the album versions, here sounding choppy, uncertain and only half-realized. Much better are "She Can Move" and "The Art of Being Humble"…but they, in turn, are not even a patch on the versions that appear on the 25 Years reunion concert, and therefore must be considered less than totally essential for the Akvarium collector.

The only two tracks here really calculated to grab one's attention are "Katya-Katerina" and "Don't Drink the Wine, Gertrude." The former is a terrific, jaunty little song built around flute and acoustic guitar, which never made it onto an album before finally being collected on Cabinet of Curiosities. It always brings a smile to my face. The other song is the closer from Kostroma mon Amour that here reaches all of it's goofy clap-along, sing-along, sway-along potential. If the entire album could have been even half as unfettered and fun as the concert-closing "Don't Drink the Wine, Gertrude," Cyclone's Center could have been a whole 'nother kettle of fish.

And finally, it's worth repeating that for a two-disc set it's not much bang for your баксы: 82 minutes is mighty slim-pickings for a double-album in the CD-era…and seems particularly miserly given that two of the best Akarium live-albums, Letters of Captain Voronin and Aroks i Shtyor, are single discs that clock in at over 70 minutes. Bad marketing move, Borya.

Conclusion: I wouldn't go quite so far as to say "don't buy it," but among all the albums at the core of the Akvarium catalogue (i.e. Original Akvarium, New Akvarium, APXUB) this is arguably the one you need least.