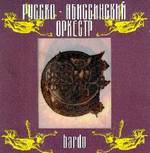 Some Bodhisattvi have expressed confusion regarding Bardo. "Whence the Llars," they cry, "and whence the Hlars?" I've never understood why such a mainstream album causes problems among otherwise experienced Boris listeners. Once you understand that Bardo was Boris and Co's attempt to create a Russo-Abbysino-Tibetan rewrite of West Side Story, it all falls into place.

The story takes place in the inner city boroughs of Bardoville, where Sirakh Malatoy Tan (she of the Llar gang) and Skir Lametan (he of the Hlar gang, but formerly known as "Skipsi Drag" during his days of sexual experimentation) have fallen in love. They conceive of a new, unified city, where everybody's in and nobody's out, which they call "Barndo" but after a romantic night together (during which the audience is treated to the wacky comic relief of the ethnic number "Zarn Hlar" and then to the lovers singing of their love in "Avalon Sunrise") the two gangs fight a horrible battle to the catchy but bloody tune of "Aballon Sayo". The lovers commit suicide and their mothers come together to sing their lament of the galling horrid unfairness of it all. Zan.

I was lucky enough to be living in Moscow during the short run of the Bardo stage production. I still have my copy of the libretto (autographed), the t-shirts, a bootleg video, two of the limited edition posters, and (naturally) the original performing cast soundtrack. If you're interested in purchasing any of these items, watch eBay carefully... in fact, have it email you whenever someone posts an auction with "llar-a-hlar" in the description.

You won't regret it. This is history, my friends.

Dzhrew finally leaves off lingham polishing long enough to leak the thesis statement for his eternally forthcoming review: I love this record, and listen to it dangerously often. Regardless, I'd still prolly only recommend it to people who find Cabinet of Curiosities too mainstream to warrant its subtitle, "for collectors and lunatics." If there was ever an album for lunatics, Russo-Abyssinian Ochestra is it. Even Kopeikin called it "violet." You don't know him, but that word speaks volumes.

Not much is known about this collective, and that which is known we know only from vague sources: for example, that the Russo-Abyssinian Orchestra is, by definition, an anonymous half-monastic outfit realizing sacred music of a little known plane.

The recording of Bardo (by the way, here that word most likely doesn't have any relation at all to Tibet) began in 1989 as the soundtrack to the S. Debizhev's film "Golden Dream," but very soon it became something bigger than that. The recording continued in three stages, and, after a very long pause, the last two layers were added in December '96.

It seems that this collective, above and beyond all this, is outside of time. To speak plainly, this music appears (and disappears) without taking into account our wishes. All of the vocals were recorded on the first attempt; every attempt to re-recored them wasn't successful. The same thing applies to most of the instrumental parts and to the sound-editing (courtesy of O. Goncharova and D. Lipaya).

It's known that the words do have a meaning, but don't yield a translation fit for human comprehension. It's also known that the album has the most straightforward relation to the world (defined as the life in that country in which we all live). It's impossible to explain it in more detail than that. It came about of its own accord. An old debt was paid.