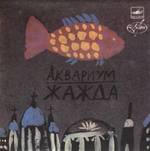 If you want to be technical, this is an EP—remember those? Probably not, if you were born anytime after, say, 1975—a collection of songs shorter than a full length LP, but not a "single" track intended especially for radio play. These songs were released in this format presumably because the Melodiya apparatchiki orchestrating Akvarium's first officially sanctioned Soviet-era releases didn't deem all the songs on Silver Day and December's Children fit for public consumption, so wouldn't put out two full-length albums. Or, perhaps, they simply thought that by releasing a mini-album named after and centered around "Thirst," the worst track the original Akvarium ever recorded, they could back-handedly sabotauge their future recording career. Just my personal theory.

(Actually, I know that Boris personally liked the song "Thirst" a lot, and that, in any case, the song is catchy and accessible compared to stuff put out at the time by some of Akvarium's contemporaries, like Eno-obsessed, discordant noise-meisters Zvuki Mu.)

If you want more information about the songs themselves—which, because of the analogy of Melodiya's White Album we can safely assume are identical to extant album versions—then see Silver Day and December's Children album reviews.