Stuffography The Library of Babylon 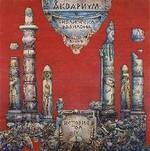 With this album, we conclude our archives of Akvarium. Time moves on. Old Aquarium, R.I.P.- Boris

I bought this album a year after it came out, not knowing it was a year after it came out, because much to my karmic regret, I'd bought a cheap pirate cassette with no liner notes. Cheap in the sense of price, but not endurance—it survived multiple replaying over the 3 years that it served as my only source of Akvarium (with a brief intermission of Navigator and Kostroma Mon Amour, which were quickly lost and/or borrowed indefinitely by Russian friends).

Why this end-of-the-line archival album for my first love? Because, faced with a fat shelf of pirate cassettes in the Black Sea Bookstore, and armed with only a dim memory of Red Wave and the urge to explore, I picked the title that looked most comprehensive. The library. And indeed it is—Library of Babylon has everything the neophyte needs for a full introduction to the forward-and backward-looking mysteries of the band that still won't rest in peace.

I will let Boris speak about the songs (from the liner notes), and add my own brief remarks as necessary:

Boris sez: "Recorded for S. Soloviev's film Home Beneath the Starry Sky with the help of Olga Eldarov on harp and Mos-film orchestra musicians on trumpet and trombone. Remixed in Feb.1993."

Dzhubchik sez: We like Boris as an old-time radio guy singing about gay janitors (and/or groundskeepers). And not gay in the sense of happy or blue.

My Name Is Death

Preferred translation: "Howdy, My Name Is Death, What's Yours?"

Boris sez: "From the troubled times. Fortunately, recorded anew by Aquarium in Feb. 1993."

Dzubchik sez: This song always bugged me because I could immediately understand the chorus, and it would get stuck in my head. Perhaps that's what he means by troubled times.

Boris: "A song of the transitional period. Recorded in 1993 using the shamanic tambourines of the group 'Cholbon' and other reverse methods. On trombone, V. Tsymbal."

Angel of the Nationwide Hangover

Dzhubchik: Great for learning genitive case and complex Russian concepts of post-drunken states. Also, with the sampled patriotic rally at the beginning, it comes pretty close to being political for an early Aquarium number. It needs to be translated. (Don't look at me!)

Dzhuba: Breaks into your pleasant hangover like a herd of goats. Go away.

That Which I Must Say

BG: "Written in 1917 by A.N. Vertinsky. First heard by us in 1987 and—right then—it hit the nail on the head. Recorded at the same time we recorded music for the film Rock"

Dzhub: Beautiful and spare. Boris squeezes every drop out of this sucker. I don't know for whom, or why it has to be, but it's great.

Dzhuba: Sovietski stoners warble around with cello and bongoes. I guess you could call that dancing.

Dzhub: I think the man's being a little sarcastic, but it is a weird song. Vodka on Borya's breath almost knocks you down. He's halfway in the storm sewer on this one. Dyusha's down there with him. It sounds like they're about to fall in (aaa-aah, ah, ah-wah-uh-ah…), but then Gakkel comes in and rescues them. Good ol' Seva.

Stand by the River

Dzhuba: Even novice Russian-speakers will be able to pick up on the satirical elements of this song, which weirdly predicts future national obsessions with Mexican soap operas, etc. She's only five, doesn't yet know how to read, but she knows more than her Mom—she's got her own program. Boris gets all this through Radio Svoboda? Don't miss the kazoo solo.

BG: "A classic of the new stagnation. Written and first sung at Aquarium's first stadium concerts at the Palace of Sports 'Jubilee' (St. Petersburg) in Fall 1986, recorded for radio shortly afterwards."

Dzhubchik: I happen to know Boris made up this song right on stage in a drunken fever. The first verse is simply, "Сестра дык, елы-палы!" which a great concept, if inexplicable in any language. Perhaps the song has become stagnant to its creator, but it's a lovely portrait of sisterly-brotherly love and forgiveness. Or it may be about nothing at all, but it has a nice beat.

BG: "Written for the film Mitki in Europe [now there's one to rent -Dzhub] by A. Uchitel [I'm definitely starting to think he's pulling our legs]. Recorded in 1991. E. Schurakov on dobro."

Boris: "The song for some unknown reason didn't make it onto Acoustics. Written and recorded in 1981. A. Tropillo on classical guitar."

Dzhub: My all-time favorite—see, I got the Acoustics no one else got. Weird lyrics by George about about combines, dancing goblets, watery warehouses, and stuff. Borya's all the way down in the storm sewer, and Gakkel's down there with him. Love it, sing it, feel yourself go mad.

Silver of My Lord

Dzhubchik: Boris is so shy. This is Russia's "Stairway to Heaven"—only imagine "Stairway" in emerging from a country of state-sponsored athiesm, and you have part of the reason why this song still gets those Bic lighters burning at concerts. It's also a beautiful ballad, with the nicest flute solo imaginable. Has spawned many translations on Planet Aquarium. Will spawn one here as well.

In actual fact, this was the first thing that “the second coming” of Akvarium began to record. Tit (Sasha Titov) and Ratsen had a studio on Fontanka, and, when we became a single group, it was natural to try to use it as much as possible. For starters we decided to gather everything that hadn't been anthologized on Archive: this involved recording many songs that it'd been impossible to record in the past, and at the same time served as a trial-run for how the group worked as a unit. An example of this is “Jungles”: we'd tried to record the song with the old Akvarium at the time of Home Under a Starry Sky; on Library it was subjected to a long, loving reworking in light of a new frankness among us. Titov's dog Chuy is even to be found there, faintly barking towards the end of the song—and, it goes without saying, barking in back time. We didn't spare even the most sacred of things.