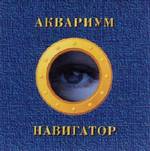 Fog on the banks. The plangent cry of seagulls. Icebergs ghosting through iron-gray waves, spray freezing on the shrouds, stores low and a scurvy crew. Thank heavens for the Navigator…don't leave home without him.

Of the three mid-nineties Akvarium albums that fuse Russian tradition with different musical idioms from around the world, Navigator is far and away the most successful, eschewing the somewhat muddled eclecticism of Kostroma, mon Amour, but bolder, more lyrical and more personal than Snow Lion. It's also, in point of fact, a little bit of a downer, containing some of Grebenschikov's most trenchant, searching lyrics. What makes it a work of genius, however, is the way the music expands beyond the lyrics, providing filigree and shadow in a beautiful synthesis of sound and effect. Like sea chanteys of old, Grebenschikov is whistling past a watery graveyard and having a marvelous time along the way.

An itinerary for your journey:

Little Blue Light: Arkhangelsk. Death, like the apparatchik He is, pursues us in a black car with a little blue light, (we're guessing a Volga) while a deceptively jolly accordion keeps the time. A tiny, cut gem of a song for those days when your life seems to be rattling along like a trolley, and your cornershop is fresh out of Fate.

The Last Turn: Magadan. Midnight on the longest night of the year. An achy-breaky cello, a wistful accordion, and a gently strumming guitar offer up a prayer for the better-off-dead. Sad, sad, sad and lovely. "Pour me another and make it a double."

Cemetary: The Altai. A wintry (bone?) flute blowing off the mountains, eerie electronic drones, and a distant thunder of cymbals swirl around a muted acoustic guitar and mandolin. A ceremony for the unburied dead of a land unredeemed by blood sacrifice. Over the top, yes, but only because it's so high up. Some say "too much"; I say "too true."

Don't Cut Me Down: A brief side-trip to America: Memphis-style horns and a hard-rocking electric guitar make an up-tempo rave up that contrasts starkly with the other tracks on the album. A mitten concealing an ice pick. Probably everybody's least favorite track on Navigator, but not entirely without merit.

Suffering: Nowheresville. A beautiful, lilting and heart-breaking song about the Unbearable Heaviness of Being, built around mandolin, guitar, flute, violin and quiet percussion. If you think this song is anything less than perfect I don't even want to hear about it.

The Fastest Airplane: Sheremetovo-2. BG's love ain't leaving on a jet plane; she is a jet plane. A lonely horn, an accordion, and a cello all take turns joining BG and his guitar in pursuit of the supersonic. One of the best things he's ever done in a lovelorn vein, it's another A-list song.

Navigator: Sort of BG imitating Edith Piaf in the French cafe at the end of the universe. Is that a clavichord in the background? A strange, strange, and (just incidentally) wonderful song, silly and sinister in equal measure. Watch out for those crossbows on the Metro.

Barge Guard: At the Yarmaka. Kind of a throwback to Triangle, and the sublimities of "Evgraf the Kid." Oompah carousel music, and trotting-horse percussion vie with an accordion and a merry flute. I defy anyone to make complete sense of it; but if we demanded complete sense we wouldn't be Bodhisattvas.

The Three Sisters: Deep in the Taiga. An intricately layered nightmare lullabye about innocence and experience, beauty and danger. A grim Grimm's tale for our time built around acoustic guitar, cello and mandolin.

Garçon №2: St. Petersburg. Things fall apart: A reflective country-tinged requium to the shades of Akvarium past. Just lovely. Great video, too, if you can find it: See BG get naked at the anvil!

Religious Ficus: Nepal. Hymn to a houseplant or holy parable? Either way, it's another wistful flute, guitar and accordion excursion into the collective subconscious. Aum.

Amazing Master Lukyanov: OK, you got me...I haven't the faintest idea what he's on about here. Trumpets, oboes, and an organ complement a gentle cascade of acoustic guitar; the coda, in partiucular, is a thing of beauty. Whoever this Master Lukyanov is, he is indeed amazing.

Everything began on the train on the way to Odessa. I woke up at 3:00 a.m. tormented by thirst and the feeling that certain lines were fermenting in my head and wouldn't let me get back to sleep. “The Badaev warehouses are full of noise and burning…” What warehouses were these? Why were they noisy and burning? There was no answer. (In the end this became part of “Katya-Katerina,” a song that didn't even make it onto the album). But I'd made a start. The songs wrote themselves practically without the participation of their “author.”

Everything went along in much the same way in our village. “The Last Turn,” “The Religious Ficus” and such like—a song a day. After the village was Paris (a big concert in the Theatre de la Ville, a few weeks after Okudzhava had played there; it was specifically for this concert that a small local record company, Buda Records, released our first mysterious “big hits” [English in the original. -trans.] “Boris Grebensikov & Aquarium 1991-1994”). The fit of composition continued. In the mornings I'd sit in a bistro along the boulevard and note down whatever came into my head. And into my head came “Three Sisters,” “Navigator,” “Garçon ¹2,” “Maxim the Forester,” and “Suffering.” All this in a week.

Truly, I tell you, this kind of thing never happens. The roll I was on continued in Katmandu (“Cemetery” and “Incident in Nastasino”). All that winter we made demos in Pushinskaya 10 (where “Custom House Blues” and “The Fastest Airplane” were added). It became obvious the general make up of the album would once again require the sounds of a violin, and Ryusha brought along his colleague in ancient music-making, Andrei Surotdinov, who quickly, irreproachably exerted an influence on our discordant ranks.

In the spring, a trio of us (Alexei Pavlovich, Sergei Schurakov and myself) went to play a concert in London; there, unexpectedly, my old acquaintance Joe Boyd popped up (the very same who'd added something extra to The Incredible String Band, Nick Drake, Fairport Convention, and half the history of the rock-n-roll, for that matter). He let drop a couple of compliments and said that he'd like to help in any way possible with the recording of these songs.

A month later I was checking out Livingstone Studios when I got acquainted with Kate St. John; she played the oboe beautifully, knew an unbelievable number of musicians and loved our songs almost as much as I love them myself. We exchanged faxes for two months several times a day, nailing down details of arrangements and balancing the insanity of our methods. Then summer was upon us and the recording began.

Everything was very simple. Getting on the London Underground downtown, you'd take the Piccadilly Line to Wood Green, and from there it was a three minute walk to the studio. A quiet London morning. Jerry Boys—the owner and chief sound director, starting back with the Beatles—with his humorous catchphrases would start taping. Young Simon would bring fresh-brewed coffee. Where do we begin today? “Less more flute, please” [English in the original. -trans.] Ded shouted into his mike (since then this specific phrase has come into general use at Livingstone Studio). The group recording in the neighboring studio planned to tempt away Schura in order to beef up their production with the unheard of beauty of his accordion. “I'll come tomorrow,” Mick Taylor had said. Jeff had known him for many years: “Probably he'll drag himself in by the end of the week,” he said. He came on Thursday evening and asked that the sense of the songs be translated for him, and then he turned on his guitar and played everything within 20 minutes spot on.

From the space near Earth we went into orbit. The world, at long last, had become one space, not divided into countries and political entities. In general, a Russian only becomes truly Russian when he stops depending on his surroundings.