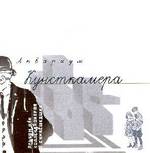 Now here's a curiosity indeed. There's no earthly reason why this should be any good. In fact, I can think of several excellent reasons why it should be awful:

1) It's composed entirely of studio outtakes. Even with the best bands, this can be a test of true devotion, viz. R.E.M.'s Dead Letter Office or XTC's Rag & Bone Buffet.

2) Unlike Dead Letter Office, it features a half-dozen different line-ups galumphing through at least as many basic styles of music.

It comes as a pleasant duty, then, to report that Cabinet of Curiosities is actually a lot of fun, an entirely worthwhile purchase. This is not to say that it's as good as most of the studio albums, but taken on its own terms—as a collection of odds and ends, half-polished gems and jolly tchotchkes—it'll bring a happy Buddha smile to any Bodhisattva's face.

Of couse, I do have a few quibbles. First and foremost, the lack of anything approaching decent liner-notes is more irritating than usual given that the songs are taken from a bunch of random recording sessions from 1988-1997. From the musician credits the dedicated Bodhisattva can pretty much work out the provenance of the recordings (e.g. Dave Stewart on guitar and Olle Romo on synclavier on "She's My Drama" clues us in to the fact that it was recorded during the Radio Silence sessions), but do we get any kind of desciption/context/chronology from his BG-ness? No, of course we do not.

In a way, though, that's part of the adventure: in this Bazaar of the Bizarre it's up to the buyer to try to figure out which carpet is an authentic 17th century kilim and which was last week's special at IKEA. Truth in advertising and American labeling laws need not apply.

The other moderately annoying thing is that the album exists in two versions, an American one and a Russian one, which have different cover art and slightly different track listings. Devoted as I am to completeness, I find I don't have it in me to purchase both versions—indeed, for all I know the Russian version has splendid liner notes (which would make it almost unique among Akvarium albums, but never mind)—therefore the comments above and below relate properly to the American version only. In the track-listing below, tracks 16-18 are found only in the American version, while tracks 19-23 are unique to the Russian version (and, ergo, unreviewed here).

Bearing this in mind, it's time to buy your tickets from the crabby old biddy at the door (three times as much for иностранцы! Everybody knows they're rich!) and introduce yourself to the Cabinet of Curiosities...

One-and-a-half Meters Above the Earth: Dyusha starts us off right with this warm, bouncy, accordion and flute instrumental interlude, of a piece with some of his pseudo-Celtic efforts for his post-Akvarium band, Trilistnik.

St. Herman: When a wee tad in Catholic school, I dreamt up an Organization For the Popularizaion of Little Known Saints (OFTPOLKS), thinking that the lubricious-sounding St. Cunegundus (Virgin and Queen) and the equally potent St. Firminus didn't have nearly the recognition they deserved. Good St. Prince Herman can join OFTPOLKS any time he wants, the more so as his song is a jaunty, Beatles-flavored toe-tapper. For anyone who likes Little Forelock, accordions and harmonizing...including virtually all sensible people, of course.

Sands of Petersburg: From the sessions of the eponymous album, whose deficiencies I've already tackled at length, which makes it unsurprising that it's just about my least favorite thing on Cabinet of Curiosities. A banshee-wailing harmonica and bombastic instumentation swamp whatever merit the song has, another tune lost in those shifty Peterburgskii quicksands of over-production.

Song About an Aborted Departure: "If only I were a little more sober I'd be on my way..." Ah, yes. We've all been there. Linger a little too long at that party, and next thing you know you're stuck sleeping on floor next to the clinking dead soldiers. A delightful little throw-away that would fit seamlessly into Acoustics. One wonders just how sober BG might have been when recording it, though, as the liner-notes, such as they are, have a bit of a blackout: no date, bass - ?, percussion - ?.

The Empreror...: Full title, it should be noted, is "Император Пересекает Плато, Двигаясь Поочередно В Овоих Направлениях. Его Свита Почтително Следует За Ним" ("The Emperor Flogs Plato by Turns from Either Side. His Retinue Follows Deferentially.") Whew! Take that Monks of Doom! I adore this song, though: a semi-ragtime instrumental oompah hootenanny featuring a "bass (?) French horn," a woozy violin, a jew's harp, and a music hall piano, among even less likely things. And did I mention the "yum-muni yum-muni yum-muni" bit? It sounds like a chase scene in some unfilmed Russian version of The Sting, and will be duly appreciated by all except the most serverely humor-challenged.

Katya-Katerina: Enchanting. A little seen-better-days parable from, I believe, the Navigator recording sessions, with which it shares a certain митьки sound. An effectively distorted vocal—given the deliberately tinny sound of an old-time PA system—waltzes wistfully around a flute, violin, accordion and something that sounds an awful lot like a harpsicord (but is credited as "bells").

Minuet for a Farmer: Interesting...and not just because it's one of the very oldest Akvarium songs that a certain Bodhisattva once thought had something to do with oral sex. Not only does it exhibit none of the trying-too-hard qualities that marred Sands of Petersburg, it's a lively, imaginative romp across time and musical styles. You gotcher pseudo-Arturian pastoral flute and guitar meditation. You gotcher gently melancholy string-section bridge into jazzy guitar chords. You gotcher abrupt transition at the end into a horn-based music-hall two-step. This may make it sound like a bit much, but in fact it's quite nice and suggests that whatever my qualms about Sands of Petersburg old songs can occasionally be dusted off successfully.

She Doesn't Like It: One of BG's off-kilter love songs and the closest Cabinet of Curiosities comes to a straightforward rocker...though recorded in 1993 it actually sounds like it belongs on 1997's Lilith. But the Bodhisattvas of Babylon Ladies' Auxilliary thinks "she" is out of her gourd for not liking "it," whatever "it" might be, and vow that BG would get no such guff from them.

Blessing of the Hills: Now let us pray. An acapella toss-off featuring BG, Titov and Dyusha, probably from the Black Rose... sessions.

Boy: Easy does it. A simple, gentle, and ineffably sad song built around just a touch of guitar, a muted violin and a hint of accordion. This one's from the heart, I think.

She's My Drama: As above, from the Radio Silence sessions. The mere thought of an outtake from RS is enough to send shivers down the spines of at least 85% of Bodhisattvas, but this is actually not half-bad, and seems to have been not included on RS on the supposition that the benighted American public couldn't possibly cope with listening to two tracks in some "furn" language. This isn't to say that it doesn't share every single sin of the Radio Silence songs, and Dave Stewart won't rot in hell. (A curse upon you Dave Stewart!) There are Casio-beats, fake marimbas, cheesy echo effects...the fucking works. Somehow, however, the integrity of the song comes through the mullet-headed muddle. Ripe for stripped down resuscitation at some later stage of Grebenschikov's career.

Mountain Crystal: An odd duck. Recorded during the (infamous) Radio London sessions, the song is actually much older, dating at least to 1986. The first version to see the light of day, however, wasn't this one but the one on the 25th anniversary reunion live album, 25 History. It seems strange, then, that such a relatively obscure track should have been chosen as both a fan favorite on Pustie Mesta's poll and by BG himself when compiling Territory.

Gotta confess I don't get it. It's an OK song—if over-orchestrated in a gooey manner reminiscent of ELO—but I just don't understand why this would be on anybody's A-list. The lyrics, with their high-mystical opacity don't provide much of a clue:

Well if you say so, Borya...though if you're not talking about that good ol' mountain dew, I don't have the least idea what you're on about.

How Do We Get Back Home and Royal Morning: Two of a kind, dry runs under the questionable guidance of Mr. Chucho Merchan for tracks later to appear on Favorite Songs of Ramses IV. Here's a shocker...the versions on Ramses are world's better, and I really have to wonder why BG saw fit to include these here.

Regarding the incomparable Chucho, our own Mimoza once wrote memorably If anybody...needs the definitive proof of Chucho's monumental, staggering ineptitude served up in less than two seconds...it's the end of the bridge on the otherwise terrific song "How Do We Get Back Home" on Кунсткамера. Listen in awe as, in the middle of a folk-rock track, Chucho lays down two of the most hilariously misplaced DJ scratches in the history of sound recording.

I Wanted to Sing: A pleasing throwback to the Ichthyology sound. "All I wanted to do was sing..." That's funny...that's all we want BG to do too. (Well, that and "strum guitars, chime chimes, stomp feet, orchestrate the musicians of madness, and, in general, make lots of music" Dji, quite correctly, hastens to add.)

Song About a Passerby, Spring on a Riverbank Road, Song, Be Sung: These last three tracks collect in one convenient place most of Boris' contibutions to the three Mit'skie back-to-Russian-roots souped-up folk albums. Not everyone's cup of tea, perhaps, but I think they're splendid, particularly the crying-in-your-kasha nostalgia of "Spring on a Riverbank Road." Dji, however, laments the "cruel exclusion of his brilliant version of "Dark Night" from Tanks Rumbled on the Sea. Oh well. Renunciation is a piercing virtue, as the poet said.

Further Notes: The American release, and only the American release, is subtitled "альбом для коллекционеров и сумасшедших" [album for collectors and madmen] with the interesting (although probably unintentional) implication that what would be considered totally deranged in America is considered perfectly normal in Russia. Be that as it may, the Bodhisattvas all pine for that very Russian madness.

Just what is a "cabinet of curiosities," anyway? Dzhrew elucidates: Кунсткамера is a museum of sorts in SPB. The one with mutant baby heads in jars and stuff like that. Never went.