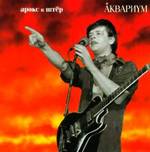 Though it shows up as a lyric in "Cold Beer," the name is taken originally from the backwards-masking on Triangle. I don't think that anyone's ever taken the trouble to unmask it to find out whether BG's screeching "My sweet Brezhnev!" or "Gakkel's dead" or "Somethingerother is going to happen real soon." Which is probably just as well: it's simply our mantra, and it needs to be yours as well. (Note: Thanks to the folks at L.I.N.G.H.A.M., you can find the answers at Mirrors to the Soul in our Publications section.)

We lead off with, unpromisingly enough, a shrill version of "Ashes" that goes bouncing off the walls. A little "Ashes" goes a long way, I find, although if you've had a really bad day at the office I've found it's very therapeutic to turn up the volume and screech right along. Then it's on to "All Along the Watchtower," errr, I mean, "September," a decent song but not exactly a highpoint of Akvarium musical originality. Things brighten up considerably with "Marina"—a raucous rocker originally found on Electricity. Sorry Электричество partisans, but this is the one kicks all kind of ass: Marina may be "охуела," but for our part we're smoking a supremely self-satisfied post-coital cigarette. On the track that follows, what "Empty Spaces" loses in studio crispness is more than made up for by the wacky noise brigade hooting, tooting, moaning, and miaowing rhythmically in the background, though Boris gets perhaps just a wee bit over-excited at the end ("mestAhhhhhhhhhhhhhhhhhh!!!!")

It's with the fifth track, however, that we really enter the magical realm of the заебись. "We'll Never Get Any Older" is a 17 minute mind-fuck of a song: a chiming virtuoso guitar solo built over a delicately droning keyboard and surprisingly restrained drums—a sustained jam that which I would call worthy of the Doors, except that it's far, far worthier. This is followed by the brilliant, bluesy sing-along "Cold Beer," Dyusha doing a credible James Brown and highlighted by more Lyapin guitar fireworks. (Alas that Russia still hasn't taken this song to heart, and far from believing in saving power of a cold brewski, they think that it gives you the flu.)

"My Friend the Musician" is way, way far out, man: BG scats, the flute plays call-and-response with the electric guitar, and there's the occasional cello solo thrown in for good measure. There is nothing to compare it with because nothing remotely like it has been done before or since. It surpasseth understanding and must be grokked, but once you have, there's absolutely no turning back. "Sons of the Silent Days" follows, BG "wilburizing" up a storm as the band reaches a celestial Floydian crescendo that works even better than the original album version.

But this all spins just a little too far off-key on "Wonderful Dilettante" for my pure listening pleasure: under the best of circumstances this song sounds like a KGB fever-dream, and here it noisily churns and jerks like an overloaded Russian washing machine while BG yodels and screeches at the top of his lungs David Yow-ishly. You think "Hmmm...far-out man," but you don't think "Wow...play that again!" However, we're soon back on track with a good instrumental blues interlude from Lyapin, and then "In the Field of Berries Forever," which is more or less Johnny Rotten meets the Surftones and is (for all practical purposes) an Aroks i Shtyor exclusive. The sublime "Babylon" rounds off the set nicely, reminding us of the enchanted city where we've been all along.

So, not perfect, but its imperfections are actually part of its perfection. This is a snapshot of a time when for one brief shining moment St. Petersburg was probably the center of the rock 'n' roll universe (perhaps not uncoincidentally while Lionel Richie was at the height of his popularity in the States). Go, thou, and be enlightened.

Original liner notes (from the bobina years) tout this show as "Vsyevolod Gakkel' and his famous 'Terrarium'! Aroks i…. Shtyor." Recorded January 7, 1982 in DK Lunacharskii (Moscow). The show was organized and taped by the "Rockwell Kent Club."

Gakkel' sings track 11 ("A Field of Berries Forever"). This song, by the way, is also available on a speciously-labeled tape of Electricity I copied from someone in Vladivostok.

The title of track 10 may be the fairly nonsensical in Russian "Sha Lyapin's Bliuz," or even "A Lya Pinbluiz." Both variants are listed on the liner notes. One source of confusion may be that both "A" and "Lya" (Russian way to pronounce "La" as in "Do Re Mi…La...") are legitimate keys for a blues jam. If Dzhrew remembers his jazz education from high school, La (Lya) and A are actually the same note. So the confusion may boil down to a play on words and note names, combined with Andrei Lyapin's name. Then there's the whole "shlyapa" is Russian for "hat" thing—so there may be a play on that word, too. Господи. What a damn nightmare. Out-on-a-limb wild speculation here: the song is actually called "Lyapin's Sombrero Blues in A."